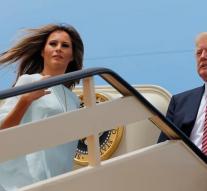 teheran - Iran has reacted sarcastically to fierce criticism of US President Donald Trump, who claimed that the government in Tehran is co-responsible for the instability in the Middle East. The Iranian Foreign Minister Mohammad Javad Zarif drove Twitter on the fact that Trump made such statements in Saudi Arabia.

'The President of the United States criticizes Iran, who has just real elections back from that bastion of democracy and moderation,' snapped the Iranian regime. 'Is foreign policy or is it milking Saudi Arabia for $ 480 billion?'

Trump said Sunday during a speech in Saudi capital Riyadh that Iran trains 'terrorists, militias and other extremist groups'. The United States also announced this weekend for selling billions of weapons to Saudi Arabia.