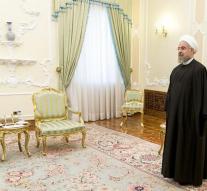 dubai - Iran can terminate its nuclear agreement with world powers 'within a few hours' if the United States continues to impose new sanctions. That said Iranian President Hassan Rohani on Tuesday for the state television.

'If America wants to go back to sanctions, then Iran will return to the conditions of the negotiations shortly, not a week or a month, but within a few hours,' said Rohani.

Iran argues that the new sanctions recently imposed by the United States shatter the agreement that the country agreed with the United States, Russia, China and three European countries in 2015. It agreed that Iran would provide a major part of its nuclear program in return for the lifting of most sanctions.

The US imposed sanctions on six Iranian companies at the end of July for their role in the development of a ballistic missile program after Tehran launched a rocket launching a satellite around the world.