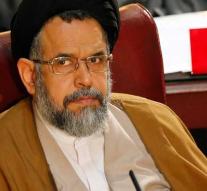 teheran - The Iranian security services have arrested dozens of spies working in government agencies. The responsible minister Mahmoud Alavi said this to the ISNA news agency. He did not say when the arrests were made and for which countries the arrested persons collected information. He did indicate that most of them have a double passport.

'I repeatedly asked officials to let us know if they knew people with dual nationality. The ministry's counterintelligence department has therefore been able to identify and arrest dozens of suspects at various government institutions. '