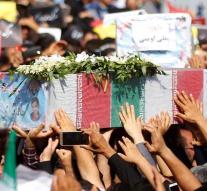 teheran - Iran arrested 22 people in connection with the deadly attack on a military parade in Ahvaz, in the southwest of the country. The Ministry of Information has announced this. Tehran blamed the United States and their allies for the terrorist act that killed 25 people on Saturday, including twelve members of the revolutionary guard.

'The suspects have been identified and arrested. In the house that belonged to the five gunmen, weapons, exclusive materials and communication equipment were confiscated ', according to a statement that was brought out via press agency Tasnim. The perpetrators were also shot dead. On Monday it turned out to be five instead of four.

The Arab resistance movement in the Netherlands for the liberation of Ahvaz (ASMLA) denied any involvement. Members of this group, like Islamic State, claimed the responsibility for the attack but according to ASMLA they were already removed from the organization in 2015.