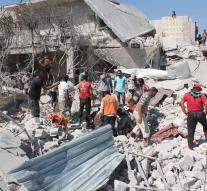 - "Iran has responded positively to the planned ceasefire in Syria. Tehran always stressed to have been in favor of a cease-fire, to allow as humanitarian aid to the population."

"Shiite Iran supports Syrian government of Bashar al-Assad, who would also, according to the Syrian state news agency SANA participate in the US-Russian agreement. The cease-fire must go into Monday across Syria."