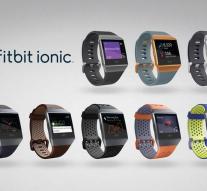 san francisco - The Ionic, the first smartwatch of Fitbit, has to make the wearables maker again the market leader. Fitbit lost its position to Apple and has Chinese Xiaomi. The Ionic is on sale on Fitbit's website on Monday and has to cost 349 euros.

The smart watch is waterproof and features gps and a spo2 sensor to estimate the level of oxygen in the blood. Fitbit has chosen its own operating system. In the future, all products of the group will run on Fitbit OS.

Originally, it was intended to launch the Ionic in spring, but Fitbit proved to have a lot of problems with rollout. For example, the group had trouble with the ecosystem of apps around its own operating system. This was partly because app developers appeared to be reluctant to create apps for the new operating system. They prefer to use Apple's and Android's current systems. Also, there were problems with the GPS and the waterproofing of the smartwatch.

In addition to the Ionic, Fitbit also launched the Aria 2, the new smart weighing scale. This underlines the concern of CEO James Park. He wants to transform Fitbit into a company that offers digital solutions for the medical world. Thus, the Ionic is already used in people who suffer from sleep disorders. In the coming years, Fitbit wants to use smart watches or health watches for all kinds of diagnostic purposes.