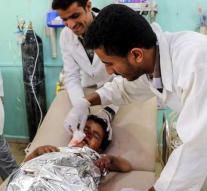 sanaa - There is an investigation into the bloody air raid that has cost the lives of dozens of children in Yemen. The international coalition that carried out the bombardment says, according to Saudi state media, to review the incident.

The bombing hit a school bus that ran across a market in the Yemeni province of Sa'dah, a Houthi stronghold. According to local authorities, 51 people were killed, including 40 children. Dozens of minors would also have been injured. The Head of Delegation of the International Committee of the Red Cross (ICRC) in Yemen claimed on Twitter that 'the numbers speak for themselves. '

The bloody air attack also led to commotion outside of Yemen. UNICEF director Henrietta Fore talked about a 'low point in the horrendous war. 'Secretary-General António Guterres of the UN insisted on an independent investigation.