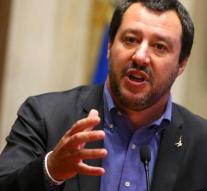 rome - The Italian Public Prosecution Service is investigating the Deputy Prime Minister and Minister of Home Affairs, Matteo Salvini. He is accused of heavy deprivation of liberty because he did not want to leave about 150 boat refugees on land. He could get fifteen years in prison.

Salvini, leader of the right-wing populist party Lega, has received a letter from the judiciary in Palermo. He read that Friday in a video on Facebook. He says he will continue on the course he has taken: 'If another ship arrives with illegals tomorrow, it will not berth in Italy. '