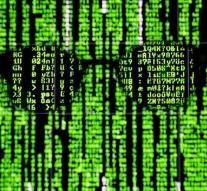 rotterdam - Consumers should be extra careful this month for fraudsters on the Internet. Before that warns the industry club of electronics stores UNETO-VNI.

In AD UNETO-VNI says that there are already dozens of complaints were received regarding fake mails sent in the name of well-known internet shops. Also, there are false online stores in the air.
Fraud Helpdesk acknowledges in the newspaper the increase in complaints. Earlier this year the hotline received about 9,500 monthly reports, mid-December there have been 12000 inside.