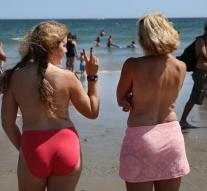 - Many Dutch women love it: topless sunbathing. Do not dare 41 percent of the fans. They are afraid that images of their breasts end up on the internet.

Three-quarters of a group of women surveyed indicated they sometimes have topless healthy. Yet many women still choose to keep their bodice. That there is a picture of their frontage comes online, the most frequently cited reason for not sunbathe topless. According to a survey of 500 women by Lotte Lust.

Shame for the breasts was only six percent of women the main reason to cover their frontage.

'With the idea that everyone has a smartphone and so sneaky pictures may make women feel not free to go topless,' the website concludes.

When another woman off her bodice, would be a third of women feel supported to do so. Nevertheless chooses some make only lie abroad without bodice on the beach.

According to the website topless sunbathing a taboo to be and the body of the woman is increasingly sexualized. 'Two worrying developments that could have bad influence on young women. 'However, this does not seem to play in the Netherlands since a vast majority of surveyed women say they have no problem with bare breasts in the sun. One in five indicated topless sunbathing in public found inappropriate.