Home / Tech / Internet can be faster in most homes 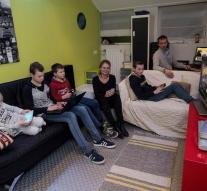 woerden - More than half of the households in the Netherlands are not as fast as they could. That is why telecom industry organization Nederland has selected ICT.

Nine out of ten households now have access to a high-speed internet connection (100mbit / s or more), but about 35 percent really make use of it. The remaining 55 percent can still switch to a faster subscription.

Telecom companies have recently invested in the speed of their networks, in order to respond to the growing use of mobile data and emerging technologies such as 'internet or things'. Last year, a total of 2.2 billion euros were spent. This is almost as much as in 2015, according to the Netherlands ICT.

The number of connections to devices connected to the Internet increased by more than 9 percent. According to a careful forecast, the number of such internet or things connections will be tripled by 2020, and will form approximately 40 percent of all mobile connections.