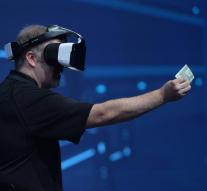 - Chip manufacturer Intel at its Developer Forum conference demonstrated its own virtual reality goggles. Alloy project, as the device is currently going through life, is completely self-contained and does therefore not require a PC or smartphone.

Intel itself emphasizes that it is a 'mixed reality' glasses. The gadget because it contains Real Sense cameras that elements of the outside world, such objects or people may show in the virtual world. The cameras keep the environment in mind and alerts the wearer for example, if he somehow threatens to bump.

The glasses will use Microsoft's Windows Holographic platform, the same software that the tech giant also used in his Hololens glasses.


It is not yet known whether Intel also plans to sell Alloy Project. However, the company announced that the open source design of the glasses is, so other manufacturers can use it to create their own VR goggles.