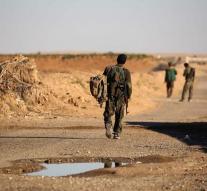 beirut - The Syrian Democratic Forces (SDF) are on their way to Raqqa occupied several villages which were in the hands of terrorist group Islamic State. By the US-backed insurgents Syrian stronghold of the terrorist group to a few tens of kilometers near, said the Syrian Observatory for Human Rights Monday.

At least three SDF fighters arrived, according to the observer killed in fighting after they captured five towns. It involves placing in a rural area about 50 kilometers north and northwest of Raqqa. SDF marched earlier on another front already up to 30 kilometers from the jihadists stronghold.

A complicating factor is that the Kurdish YPG militia the strongest group within the SDF. Washington stressed earlier that Arab fighters should be given a leading role in the conquest of Raqqa.