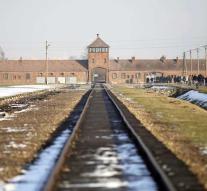 - The manager of the former Auschwitz-Birkenau concentration camp has stopped photographing visitors. 'Respect the memory of the victims,' ​​can be read in a tweet.

The call was prompted by the increasing number of photos of balancing visitors on the train tracks near the camp. Those images pop up everywhere on social media. The Auschwitz Museum says through the official Twitter channel that 'there are better places to learn to walk on a balance beam than on the spot that symbolizes the deportation of hundreds of thousands of people towards their death.' '