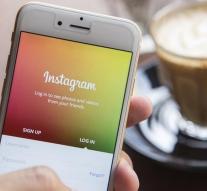 menlo park - Instagram Stories seems exactly one year after his release is more popular than Snapchat's major competitor. This can be attributed to figures released by Instagram Wednesday.

According to the app, Instagram is currently used for more than 32 minutes a day by youngsters under the age of 25. Users over 25 are around 24 minutes a day.

These figures are higher than the figures reported Snapchat last February, as compared TechCrunch. Snap then suggested that his application about thirty minutes used per day in the age to 25 years and in the higher category in twenty minutes.

Instagram Stories was considered a clone of Snapchat a year ago. In the meantime, more than 250 million people use the function.