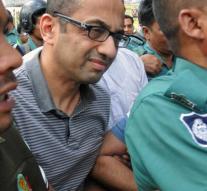 dhaka - A British hostage who was arrested after the massacre in a restaurant in Dhaka, will be released after two years. The Bangladesh authorities have concluded that Hasnat Karim had nothing to do with the drama in the Holey Artisan Bakery, where 22 people were killed in a hostage drama.

Karim celebrated the thirteenth birthday of his daughter in the Holey Artisan Bakery when terrorists invaded there in 2016. That was the beginning of an approximately twelve-hour hostage action. The authorities later thought that the British had shown suspicious behavior. Witnesses had said that Karim was willing to be used as a human shield.

The wife of Karim complained last year in an interview with The Guardian about the circumstances under which her husband was stuck. He had to sleep on the floor in prison and struggle with medical problems. He also received no permission to attend the funeral of his father.

Karim's lawyer said on Wednesday that the court ordered his client to be released. In the end no charges were filed.