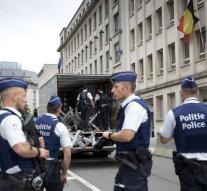 - The two policewomen who sat in the Walloon city of Charleroi have been beaten by a man with a machete, are kept in an artificial coma.

The two women were immediately operated on Saturdays. Both were hit in the face. The agent who is affected most seriously wounded to undergo major surgery. The woman, named Hakima, managed to shoot twice towards the offender. The other officer, named Corinne, was also injured her jaw and neck. It is operated on Sunday again.

Belgian Prime Minister Charles Michel and the mayor of Charleroi will visit the two victims Sunday.


The perpetrator was a soldier,, '' of Islamic State. That Amaq, let the press office of the extremist movement, namely according to research institute SITE, which follows the online activities of Muslim extremists.

The attacker of the two policewomen was a 33-year-old Algerian, was the Belgian Public Prosecution Sunday released. He stayed in Belgium since 2012 and was known to the police, but not because of terrorism. He was shot dead by police.