Home / World / Injured on collision boats on the Colorado 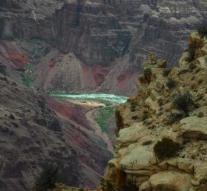 needles - Because of a collision between two recreational boats on the Colorado River in the west of the US, at least thirteen people were injured and two passengers were missing. One of the wounded was injured to a hospital in Los Angeles, 340 kilometers to the west.

Local media reported that the two boats collided with great force this weekend in a popular water sports area called Moabi Regional Park. A boat sank immediately and the other is badly damaged.