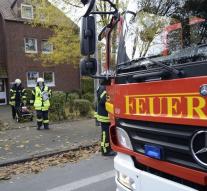 - A fire in the refugee camp near Kassel-Calden in the German state of Hesse on Sunday at least ten people injured. These would cover not go to a bombing.

According to the fire department in Kassel are about twenty residential containers on fire. The cause of the fire is unknown.

The fire was plucked with a lot of material to get the fire under control. According to German media, it's not a bomb.,, The fire would have spread from the inside out. '