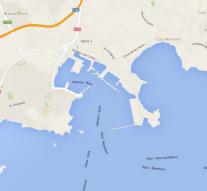 - Several tourists were injured Sunday in Ibiza when a boat in the harbor suddenly exploded and caught fire. A 37-year-old woman and her 36-year-old man there are serious condition.

The woman is seriously injured in hospital; her body is burned for ninety percent. Her husband has many burns. The torque is transferred to a hospital in Valencia, where they would live. The 64-year-old father of the woman was on the boat but only seems to have burned his arm. Also, two passers-by were injured.

The violent explosion went a jet ski, which was behind the boat a few meters, in flames. The smoke could be seen from the whole island. There is an investigation, reports El Periodico. It is still unclear what caused the explosion.