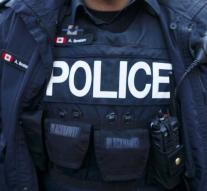 mississauga - In a bomb explosion in a restaurant in a suburb of Toronto, fifteen people were injured. Three of them are in bad shape. According to local media, the police are looking for two men who are suspected of having exploded the bomb, after which they quickly get out of their feet.

The explosion was Thursday night at an Indian restaurant in the center of Mississauga that lies southwest of Toronto.