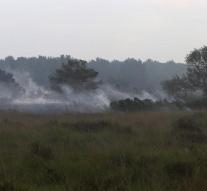 valkenswaard - The fire brigade in Southeast Brabant receives assistance from a specialist team on Saturday to extinguish a fire in the difficult-to-reach nature reserve Malpie near Valkenswaard. The fire broke out on Friday morning and hit an area of ​​about 60 hectares.

A spokesman for the fire department announces that the fire rages in an area with many buddies and heath, which is difficult to access for extinguishers. Therefore, a police helicopter was flown over the area on Saturday morning to map the hotspots. Later on, members of the Handcrew team, with extinguishing equipment on the back, will attack Malpie to fight the fire.

The fire department has prevented the fire from being flown to adjacent forest area. The spokesman expects the extinguishing work to last for the whole weekend.