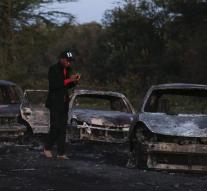 - In a major accident with a truck carrying gas tanks were last night in Kenya 42 deaths. At least 50 others were injured in the inferno after the explosion of the tank. The driver of the heavy truck hit a slope out of control and crashed into dozens of vehicles in the other lane.

Local authorities fear the death toll will rise further. The road is littered with burnt-out vehicles.

The growing middle class Kenyans are increasingly able to afford a car. This creates more and more crowds and consequently road accidents. In the first half of 2016 were more than 1500 people on Kenyan roads.