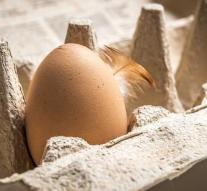 stockholm - Dutch eggs containing the pesticide fipronil have also been imported into Sweden. The Swedish food inspection department announced this Friday. The service stressed that there was no danger to public health.

The EU has been informed by the EU that the suspect eggs were imported by a wholesaler in Sweden on Thursday. The health authorities go after where the eggs have remained and they are going to take out of business.