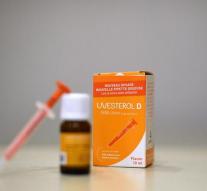 paris - After the death of a 10 days old baby France has all the vitamin D Uvestérol from the market. A French baby died shortly before Christmas after had been administered with a pipette drops of the preparation. There may be a connection, became known Wednesday.

GPs are inundated by anxious French parents with questions about the drug. The plea is not widely used in the Dutch stores but can be ordered in shops.