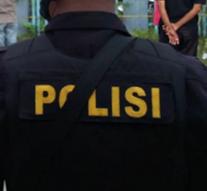 jakarta - six corpses were found in a small bathroom in the Indonesian capital Jakarta. The police released Tuesday the newspaper The Jakarta Post know that the victims were trapped by burglars and came by suffocation.

The victims include several children. In the small room that half meter wide and one and a half meters long, eleven people were trapped. Among them were members of the family that lived in the house, servants and drivers. Police have made no announcements about the status of the five survivors.