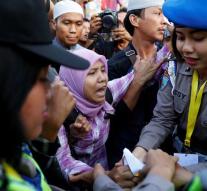 - Despite international protests, Indonesia on Friday in the early morning started with the execution of death row drug traffickers. The first was just after midnight in the pouring rain by firing squad put on the prison island of Nusa Kambangan. This was announced by the local station TV One and Metro TV. How many are killed just could not report them.

Authorities in Jakarta said this week that fourteen criminals were to be tried for violating the narcotics law. Among them several foreigners, mostly from Nigeria. In total, there are 121 people on death row, all of them for drug offenses.