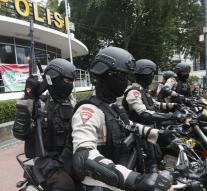 The Indonesian authorities have at least fifteen foiled terrorist plots this year and arrested more than 150 suspects. Most plans were traced according to the police Bahrun Naim, an Indonesian extremist who probably stop at IS in Syria.

An attack in January 2016 in central Jakarta which killed four people dead was the first in Southeast Asia which was claimed by IS.