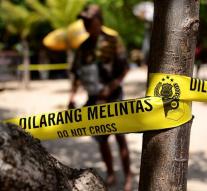 jakarta - The Indonesian authorities are investigating whether it was a busy man recently arrested for plotting an attack on tourists at the popular island of Bali. Commissioned by the Indonesian anti-terror police know.

The alleged militant, whose identity is not yet known, last week was arrested in Lampung on Sumatra island. Police found during the raid on his house a bomb and other explosive materials.

Police suspect that the man has links with terrorist organization Islamic State. He was involved in planning the attack on a police station in the Javanese city of Solo last month.


The police would not have much to say about the alleged plans for an attack on Bali.,, It was only a plan, '' said Edy Hartono of the anti-terror police.