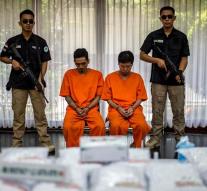 jakarta - Indonesia seems to take an example of the violent 'drug war' of neighboring Philippines.

That signals Amnesty International based on its own research. According to the organization, the Indonesian police have already killed sixty alleged drug dealers this year. By 2016 there were eighteen. The president of Indonesia, Joko Widodo, has earlier given the police the death to kill drug traffickers.

This summer, a suspected dealer was shot by the police suspected of smuggling more than one million xtc pills from the Netherlands.

Dutch people also learn to know the hard policy. In July of this year, Nicolas Dennis L. of IJmuiden was arrested for possession of 0.83 grams of hash. On images of The Telegraph, you can see how he was taken by the police in bivouac. Another investigation is going to him.

Last year, the Dutch Djaï Heijn was convicted for a year's cell punishment for possession of 224 grams of marijuana.

Amnesty speaks of a 'shocking escalation' which is not only illegal, but also does nothing at all about the causes of drug abuse. 'The authorities must remember that everyone, including those suspected of drug offenses, has the right to life,' says the head of the Indonesian branch of the human rights organization.

In the Philippines thousands of people have already been killed without any form of process since President Rodrigo Duterte came to power last year and launched his war on drugs.