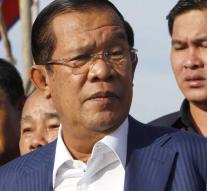 Their Sen then won all 125 seats in the parliamentary elections last month. Rainsy had called in the months before to boycott the ballot box. He also asked the king to encourage the population not to vote. In June, however, a royal declaration was issued, with 18 May as the date in which the king urged the Cambodians to vote.

According to Rainsy, the statement had been tampered with. He said that it did not come from the king. That is now a reason to sue him for lèse majesté. because he insulted King Norodom Sihamoni by questioning his words. That crime, with a prison sentence of five years, was introduced in February, after a Thai example. Rainsy must appear in court next month.

Prince Sisowath Thomico, a cousin of the king and former member of CNRP, is convinced that Norodom Sihamoni never wanted that law. 'He grew up in the West, he will never make a complaint,' said the Prince. But the Cambodian authorities think differently about that.

The largest opposition party, led by Rainsy and Kem Sokha, was accused by Hun Sen of being out of overthrowing his rule, with the help of foreign forces. Reason to ban the CNRP last year.