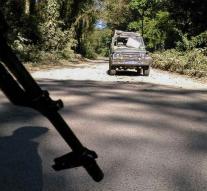 - At least three Indian soldiers have been killed when their convoy drove into an ambush in the northeastern state of Assam. Attackers opened according to The Times of India the fire including automatic rifles and rocket launchers.

The convoy was on its way to the city Digboi when guerrillas opened the attack. They used explosives to blow up an army truck. Then they shot at soldiers in a jeep. Three soldiers did not survive the attack; four others were seriously injured.

It is according to the newspaper to one of the biggest attacks on security forces in Assam at least twenty years. The authorities are supposedly local separatists behind the surprise attack. The army announced a major operation to have put launched to track down the perpetrators.