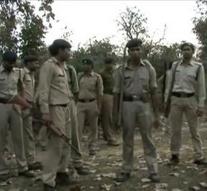 bhubaneswar - The Indian police have found hundreds of people had fallen into the hands of traffickers and forced to work in brick kilns in inhuman conditions.

Police encountered the modern slavery during an investigation into the death of a thirty pregnant woman. She had been killed because, although she had a fever and was four months pregnant, was forced to work in kilns. " When she said she could not work, the owner and the officers kicked her in the stomach apparently, so she was bleeding ", said a spokesman for the state Telangana. The woman had succumbed to her injuries.

During a visit to the furnaces, police found 293 people, including women and children, who were working there under unsanitary and inhumane conditions.