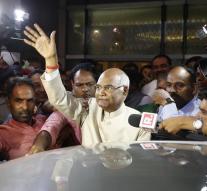 new delhi - The Indian parliamentarians have chosen a new president on Monday. Nearly 5000 national and regional representatives took part. Although the outcome of the secret ballot will only be announced on Thursday, it is clear that Ram Nath Kovind has the most chance.

Premier Narendra Modi, who voted as one of the first, said he looks forward to working with Bihar's former governor and promised his fellow-mate all government support. Kovind (71), like his rival Meira Kumar, former parliamentary chairman, is a Dalit. Both belong in the Indian cabinet system to the poorest and most oppressed population category, those of the 'untouchables'.

The role of the Indian president, appointed for five years, is largely ceremonial although the constitution states him or her as head of state. The retiring Pranab Mukherjee tried to profile as a guardian of national conscience.