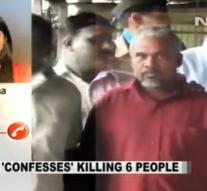 - An Indian doctor has confessed that he killed six people with a lethal injection and buried in his garden. Four bodies have been found.

The doctor was arrested Saturday after a nurse had acknowledged that he was involved in the kidnapping of a woman. She was kidnapped when she was standing at a bus stop. A day later, Doctor Death, as the police gave the accused called her the fatal injection.

According to the suspect, he has in recent years five women buried in his garden and a man dumped in a water tank. The police claims that he was driven by 'lust and greed,' reports the Indian channel NDTV.