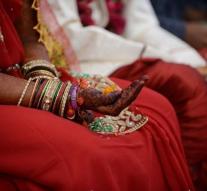 new delhi - Hundreds of Indian brides receive a bat gift from a minister as a wedding gift. The idea is that they can use them in case of emergency against aggressive or drunk husbands. This said Minister Gopal Bhargava for rural development in the central Indian state of Madhya Pradesh.

Bhargava gave a total of about seven hundred wooden bats 30 centimeters long to poor brides at a massive wedding party in Grahakota. 'The bats have a double advantage,' explained Bhargava. 'They can use them when washing clothes, but if their men do not listen or become violent they are also useful as self-defense weapons. '

The minister posted pictures of the brides with bats on his Facebook page and announced that he had ordered a total of 10,000 wooden bats. After a month, the effect of the gift must be determined by a survey. Successfully, we want to expand the initiative to other regions.