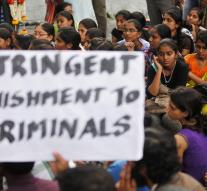 - India has adopted a law that young rapists (from sixteen years) dropped under adult criminal law. The law has accelerated adopted after protests against the release of an underage boy who had participated in the 2012 gang rape of a 23-year-old woman in a bus in New Delhi.

The parents of the victim had insisted on a change in the law after their daughter was repeatedly raped and beaten by the then seventeen year old boy and five adult accomplices. The woman died two weeks later from her injuries at a hospital in Singapore.

Four of the adult suspects were sentenced to death, the fifth hanged himself in prison. The death penalty should be performed. Seventeen-year-old was punishable under the juvenile law.