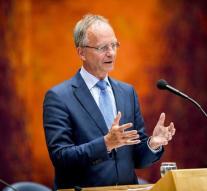 the hague - Groningers who suffered from gas extraction may call on an independent fund in the future. The Dutch Petroleum Society (NAM), which wins the gas, is no longer responsible for the payment of damages, Minister Henk Kamp of Economic Affairs said on Tuesday evening. The NAM will still make the necessary money.

How much money the fund gets and how it looks exactly is not yet worked out, said Kamp in the Lower House. He stressed that the NAM no longer decided on the allocation of compensation. An independent committee is responsible for the damage, the minister announced earlier.

Many parties in the Chamber had urged an independent compensation fund. Especially the VVD still has her doubts and fears bureaucratic red tape.