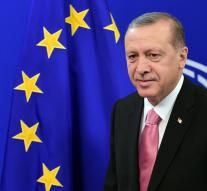 ankara - During the Sunday parliamentary elections in Turkey have been some incidents. At a polling station in the province of Kocaeli, east of Istanbul, were supporters of the ruling AK clashed with supporters of the left-wing, pro-Kurdish party HDP.

Witnesses reported that tumult arose when an election observer a torn ballot paper of an older woman just before she was going to vote. In the northwestern province of Kirklareli was arrested ringleader Feyaz Sahin of the HDP, because he would have defended itself against a member of the polling station.

Turkey on Sunday elected a new parliament. It was the second time in five months that happened. Minister Recep Tayyip Erdogan of the Justice and Development Party (AK) agreed to new elections because after the last elections on June 7 was not formed coalition government.