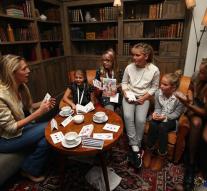 amsterdam - The Dutch labor market has big shortages of technical personnel and increase in the coming years will only increase. Especially girls that science subjects are left , while a technological background in many professions is an advantage.

Janneke Niessen wants young girls to show that technology is not boring. She is the creator of Project Prep, a book written by Niki Smit, where thirteen year old protagonist develops its own fashion app.

Recently they brought young fans in contact with women who have to deal in their work with technology. "Due to a very diverse group of women to join, I hope that girls realize that technology is relevant everywhere," says Niessen.

"They do not have to all be a programmer, but we know what can. " One of the women they could ask the shirt of the body is Lieke Pijpers. The 31-year-old businesswoman graduated from TU Delft, but now works as chief technology officer at The Next Closet, an online marketplace for used designer clothes.

"A lot of girls think that opting for technical training means you're just sitting at the computer. However, there are many creative subjects where technology plays an important role. The important thing is problem solving thinking. " The 48-year-old Jannie Minnema did not study engineering, but is rolled after her studies. The managing director of EMEA IT company Oracle points out in the Netherlands, far fewer women have been trained in ICT follow than elsewhere in Europe.

She attributes this partly to the Dutch culture where a girl who wants to study computer science is strange looks. "We see it as something for nerds, while elsewhere it is seen as an investment in your future. " Diane Janknegt (47) has come by chance in the world of technology justified. She went in 1997 as a marketer to work at Microsoft and was seized by the speed and enthusiasm. "You're constantly working on innovation. "Janknegt is convinced that technology always plays a role if you want to do something big. She now has her own business Wizenoze noting how difficult it is to find women for technical positions.