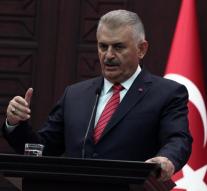 ankara - Turkey calls his troops recently returned from northern Syria when the Syrian Kurdish YPG militia withdraws behind the Euphrates. Until then, the Turkish military operation against Islamic State and the YPG continues, said Prime Minister Binali Yildirim Wednesday.

The PYD, according to Turkey closely linked to the Kurdistan Workers' Party (PKK), which carries a guerrilla in Turkey against the government army, the last time to the dismay of Ankara has made significant gains in northeastern Syria. Also on the west bank of the Euphrates pulled PYD fighters on.

The PYD has the support of the United States. But Vice President Joe Biden demanded Wednesday that Kurdish fighters immediately evacuate the western or right bank of the Euphrates. Otherwise, the PYD can forget about further US support, said Biden.


To meet the requirement, the PYD should include to retreat from Manbij. That city conquered the Kurds earlier this month after a long siege by Islamic State.