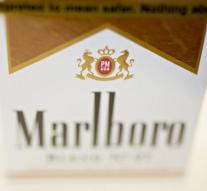 new york - The mayor of New York increased the price of cigarettes to $ 13, converted almost eleven euros. He is proud of that.

'These new laws will not only reduce the number of smokers, but also save lives,' said mayor Bill de Blasio in American media. 'We know it works. We know that people make decisions based on their economic situation. '

In total, De Blasio has introduced seven new laws. For example, no cigarettes can be sold in pharmacies: The Blasio finds it strange that people receive 'deadly' products at a place where you come to healthcare.

The United States talks about the 'biggest offensive against the tobacco industry in recent years.' That is also necessary: ​​worldwide there are 7 million deaths by tobacco. One in ten people who die, do so thanks to tobacco, the World Health Organization (WHO) proposes.

According to the WHO, taxes are indeed the most effective means of smoking smoking.