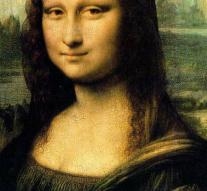 - A portrait of another woman lies beneath the famous painting the Mona Lisa by Leonardo da Vinci. That says a French scientist, who for more than ten years of research done by special lighting techniques.

According to Pascal Cotte is below the image of the most famous smile in the world to see a woman looking seriously at the side.

The Louvre does not comment on the discovery, because the museum in Paris was not involved in the research.

Cotte has the lighting technology developed and in 2004 was given access to the painting. Then he projected a series of bright lights, where a camera measurements performed by the reflections of that light. On that basis, Cotte was able to analyze the deeper layers of paint, he told the BBC.

The Mona Lisa is in the last half century been subjected to a series of investigations, including with infrared light. According Cotte gives his technique a chance " the layers of the painting as an onion peeling off. We can reconstruct the chronology of the creation of the painting. "

Da Vinci worked probably between 1503 and 1517 to the canvas, first in Florence and later in France.

Cotte says now that it is certain that the final portrait depicts Lisa Gherardini does, as assumed for centuries. According to him, the original model Gherardini, or ' mona ' Lisa. " It is totally different than the Mona Lisa. This is not the same woman. "

Experts doubt the conclusions of Cotte, which in a report on Tuesday to see the research is on BBC2.