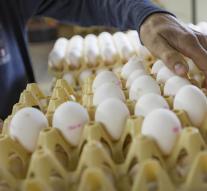 hannover - In Germany alone 35.3 million eggs have been marketed in the Lower Saxony, which may contain the pesticide fipronil.

Christian Meyer, Minister of Agriculture of the State, said Wednesday that he is based on the EU's dangerous warning system.

The German authorities initially originated from a small 11 million contaminated eggs from the Netherlands delivered to Germany.