Home / Tech / In February, a heart, crying blown in April 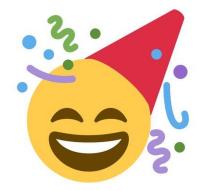 - This Sunday is World Day Emoji and social network Twitter celebrates it. The department has indicated that emoji per month, the most used.

In January a smiling face on top, while in February- the month of Valentine's Day- the heart is most often used. Also in March, hearts are the most popular, though the love in April apparently on: then the crying face is flung into the world the most. May, however, the month of reconciliation, according to the then popular kus-emoji.

June was the month of Brexit and that shows: the box was the most tweeted, followed in July by a smiling face and a happy face in August. In September, the fun was over, because when an angry face was the most popular. In October, the month of Halloween, the little skull was most common over. The year ends with respectively the '100'-emoji and a Christmas tree.

It was striking, further, that the lemon-icon in combination with the at in April it was quite popular. The reason was the surprise launch of the album Lemonade Beyonce (queen bee).