Home / World / In Belgium, eggs with too much poison 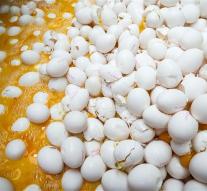 brussels - In one of the 'suspicious' Belgian poultry companies, too high concentrations of toxic fipronil have been found. This is reported by the Federal Food Safety Authority (FAVV) Agency in a press release on Tuesday.

The company concerned has been silent since 18 July because of the presence of the poison but that was under the European safety standard. Now it appears from new samples that the 0.92 mg per kilo limit has exceeded the limit of 0.72.

The company itself conducted a counter-analysis. The FAVV and the laboratory concerned are now investigating how the difference can be so great. According to the FAVV, the infected eggs 'did not reach the consumer in principle. '

The agency says the European Commission has informed. The FAVV is under fire because of the lack of communication about the problems with the eggs. Brussels is investigating whether Belgium has made a call on time. That only happened on July 20th.