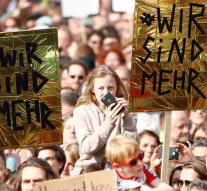 dusseldorf - In several places in Germany Sunday was demonstrated, by the extreme right and by opponents. In Cologne, for example, 12,000 people took to the streets for a more generous refugee policy.

In Gelsenkirchen, right-wing protesters and opponents got in touch with each other. A 65-year-old man, presumably one of the counter-demonstrators, was injured. He probably got a bottle against his head. In Dortmund nine right-wing protesters were arrested when they attacked the mayor's escorts.

Some seven hundred right-wing demonstrators gathered in East German town of Köthen, including some representatives from the populist party AfD, and about the same amount of counter-demonstrators. In Köthen, a 22-year-old German was killed last week due to heart failure during a fight with Afghans.