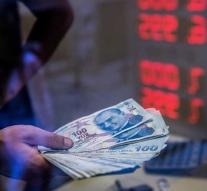 - The Turkish sanctions against US imported goods declared are not good. The lira fell by another 7% on Wednesday.

The lira was in recovery against the American dollar on Tuesday. The central bank then announced a series of support measures with which commercial banks could borrow more easily.

On Wednesday, the central bank again caught up with the 7% decline: Ankara imposed restrictions on swap transactions in the financial market.

Trade in Turkish gold doubled in recent days according to data processor Bloomberg. President Erdogan called on Turks to exchange all their foreign currencies and gold for the lira to counter the fall of the currency.