Home / World / Impersonator Kim Jong-un has to leave: 'No sense of humor' 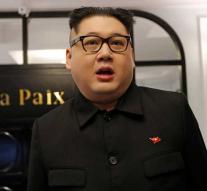 hanoi - Vietnam has revealed a well-known impersonator of Kim Jong-un. That happened about a day before the real dictator is expected in the country.

The Australian, with the stage name Howard X, made his appearance in Hanoi last week. He has now been told that his visa is invalid. 'The real reason is that I was born with a face similar to that of Kim Jong-un. That is the real crime, 'said the Kim impersonator as he boarded the airport in a van. 'North Koreans have no sense of humor. '