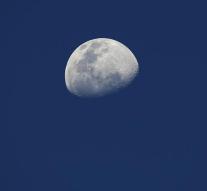 - The moon has to endure much more than we thought. It hit so many meteoroids in that the surface is plowed. According to research by US scientists. The study is Thursday in the major science journal Nature.

The scientists watched the images made by the Lunar Reconnaissance Orbiter satellite in seven years. 222 impact craters were formed in that period. Some places are a few meters in diameter, but the biggest crater is 43 meters wide. The number of fresh strike rate is much greater than expected. ' We used to think that it would take hundreds of thousands to millions of years before the surface of the moon was completely plowed. We discovered that the surface in about 80 000 years turned over almost completely, '' said lead investigator Emerson Speyerer.

If people are ever going to settle on the moon, they should drop structures and spacecraft. It is important to know how much gain with wefts to make them. That has consequences for the protection that is needed.